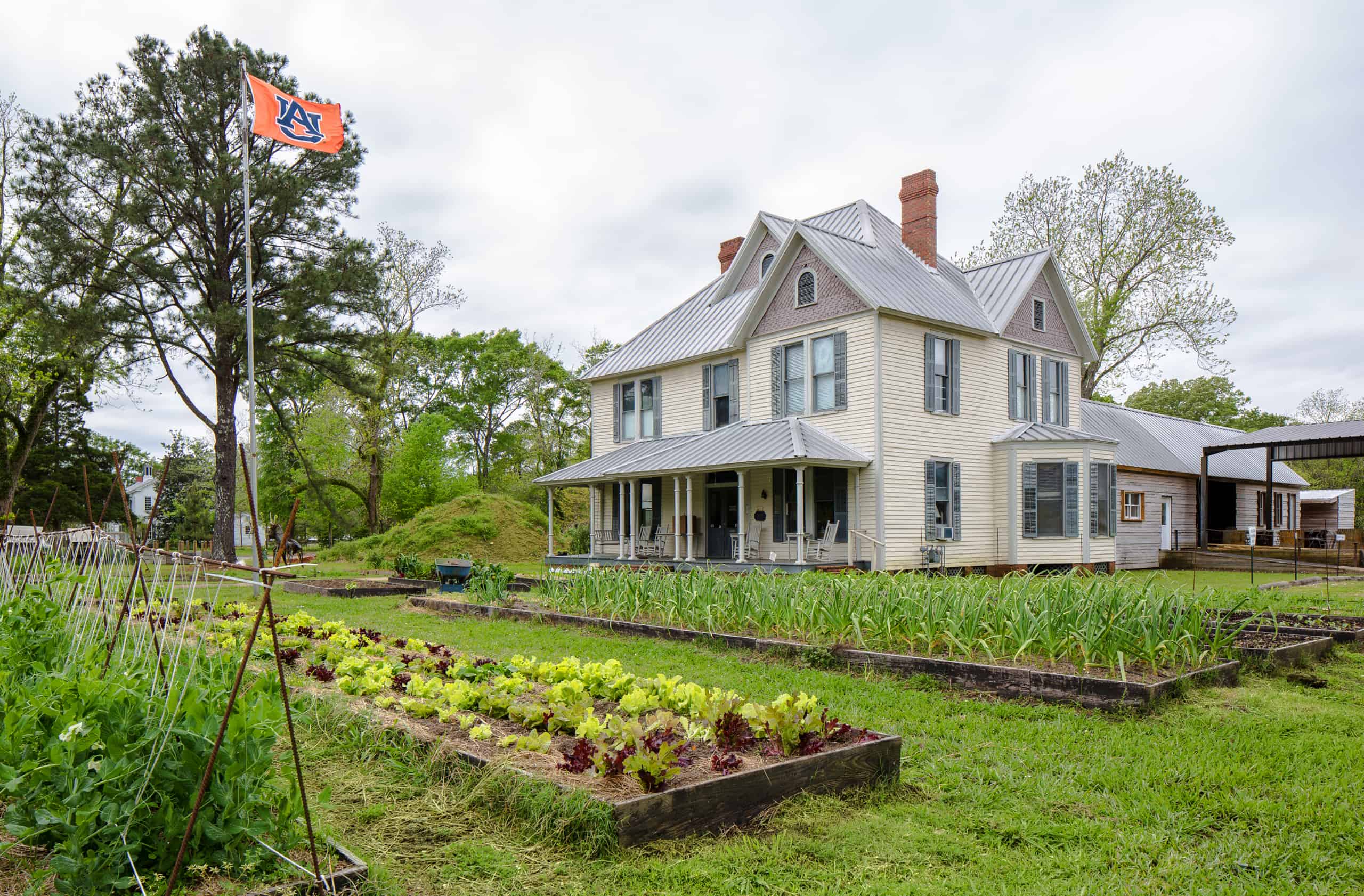 In 2010, the 3rd-year studio started what we called the ‘(r)evolution:’ a designed and built farm to complement the Studio’s educational program with a new lifestyle based on vernacular food sourcing and healthy eating habits. The students were challenged with the question: How should we eat, produce, and consume in a rural setting? After months of research and planning, they identified the Rural Studio Farm as the best tool to “walk the walk” of a local, sustainable food ecosystem. While the students recognized that it was impossible to produce all the required food on Rural Studio lands, the plan was to grow as much as possible and buy the remainder of the food from local farmers. Students’ work in subsequent years offers a model of small-scale sustainable growing strategies and passive architecture strategies for this region.

Examinging how we should eat, produce, and consume in a rural setting 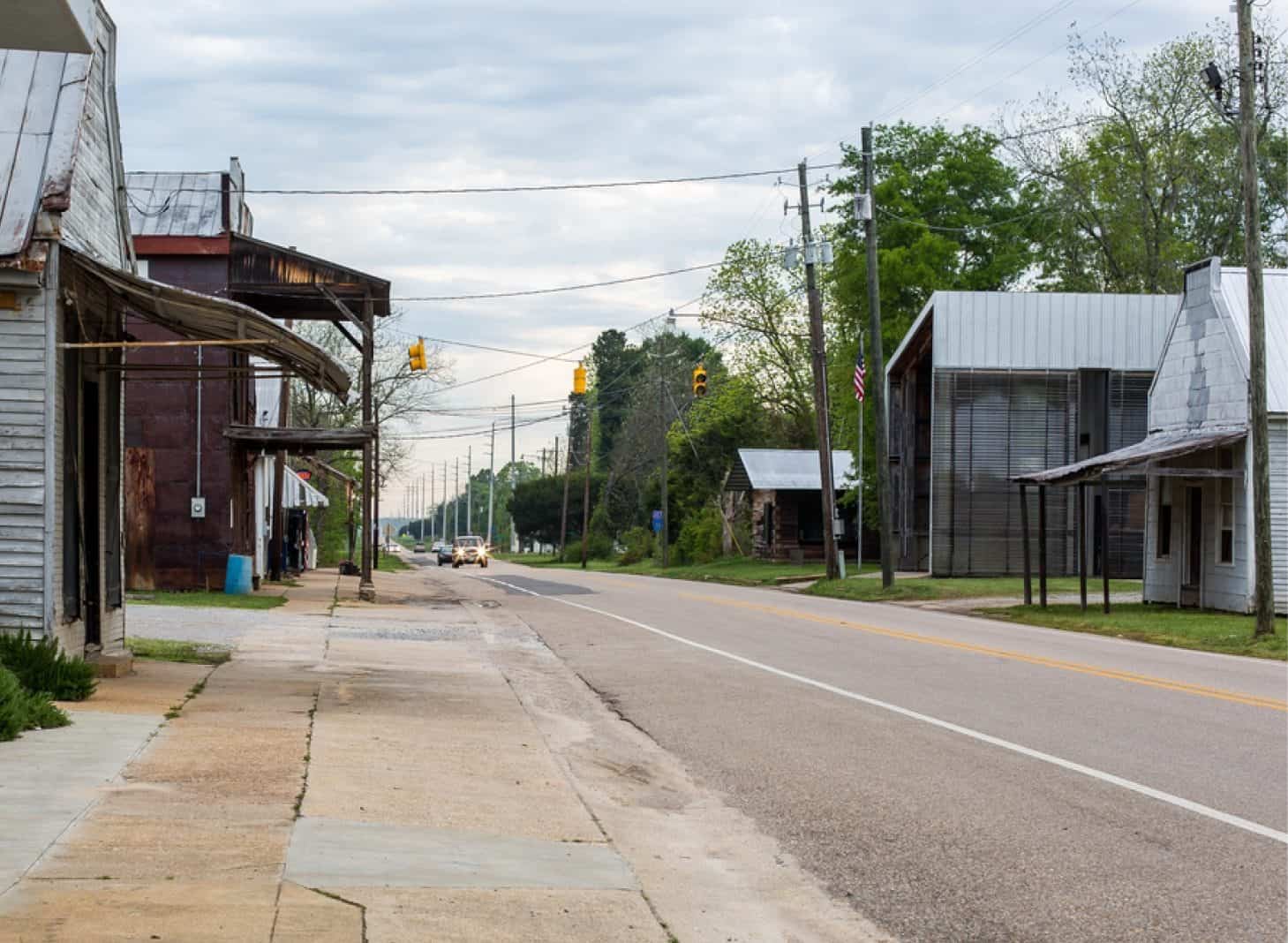 2010 FALL SEMESTER
During the Fall semester 2010, students strategized a new lifestyle for Rural Studio, including a healthy diet and regular growing schedule. They designed a Newbern Strategic Plan and a Morrisette Strategic Plan, both of which assume that eating, building, and living are parallel symbiotic systems. In short, the plans offer a way to live of the land as much as possible while creatively using it as a precious resource.

The Newbern Strategic Plan embraces all of Rural Studio’s properties in Newbern, viewing them as a series of rooms opened to Highway 61, which integrates them into the community rather than isolating them as a self-contained college campus. The plan envisions a series of projects for downtown Newbern, including: a shading green wall on the south side of the Red Barn, an orchard learning center at Chantilly House, and a recycling center next to the town’s firehouse. At the heart of the plan is Morrisette House property, the Farm’s center of production: a multifunctional demonstration site where the students live, eat, play, build, and produce their own food. It sets forth a framework to transform the Rural Studio headquarters into an intensive farm that produces vegetables to feed 50 students at least three days a week. The strategic plan re-routes the property’s entrance to increase the sunny land, replacing the original driveway with two new access roads. In order to extend the growing season through the winter months, the plan also includes a large scale solar greenhouse as the farm’s main infrastructure. The students designed and built a mock-up of a solar greenhouse made with a post and beams wooden structure, a thermal mass wall of steel culvers, and a polycarbonate envelope. 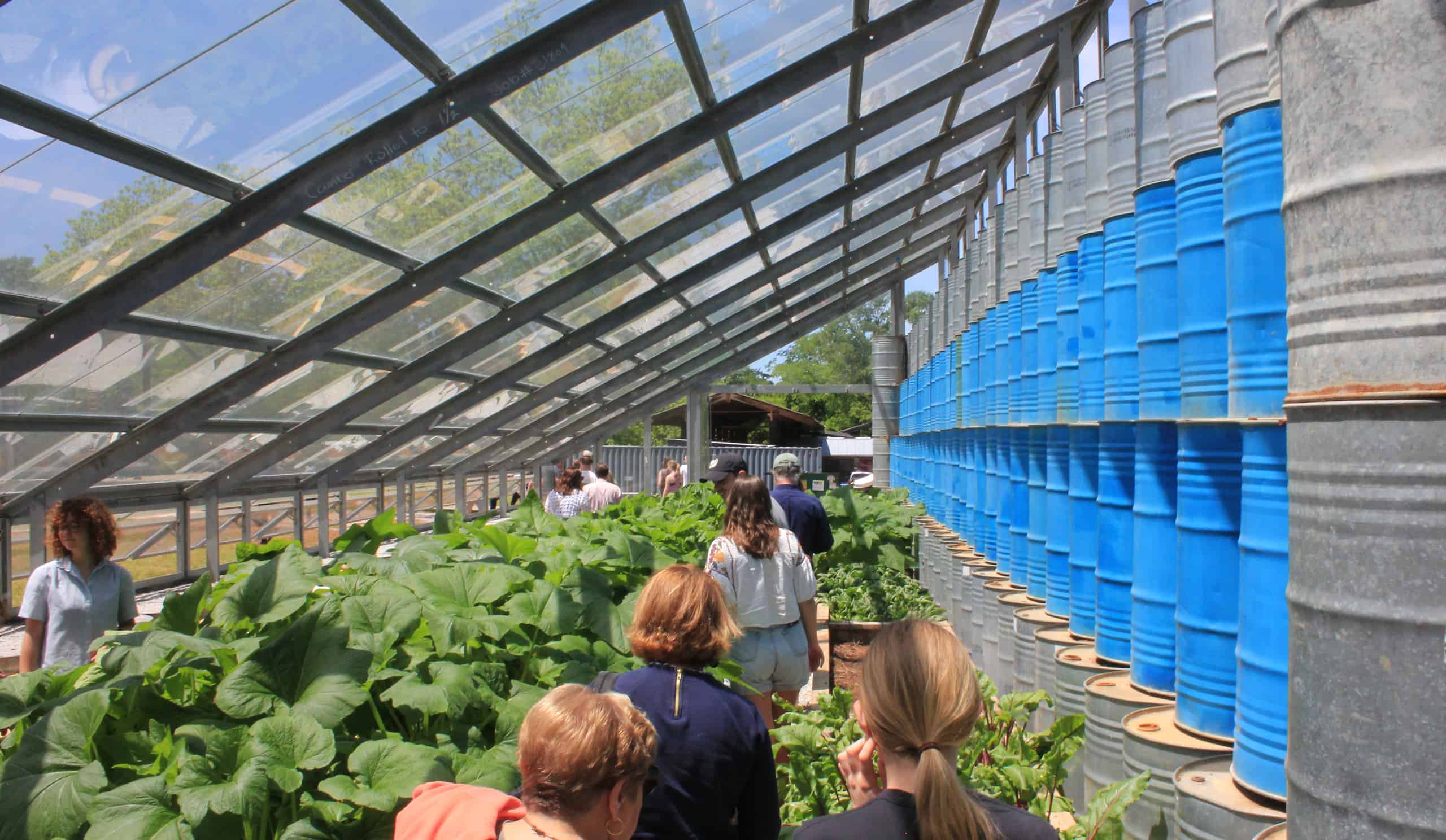 2011 SPRING SEMESTER
The spring semester students continued to develop the Morrisette Strategic Plan, focusing on the design of its main infrastructure: a 2,000-square-foot solar greenhouse with a 600-square-foot seed house, a washing station, and a storage for tools. Facing south, the greenhouse’s canted solar glass collector and 55-gallon galvanized blue drums make it the signpost and identifying structure for the Rural Studio Farm itself. The greenhouse is a lesson in passive design for architecture students and a statement about living sustainably in a rural community. The thermal wall, consisting of four rows of stacked blue drums filled with water, collects the sun’s heat during the day and radiates warmth at night. The barrels’ blue-painted color helps to both raise the water temperature and enhance the plants’ germination process. An overgrown berm on the greenhouse’s north serves as insulation while protecting the greenhouse from winter winds and integrating it into the horticultural landscape. In summer, the glazed walls can be opened to create cross-ventilation, transforming the greenhouse into a hoop house. A movable fabric covers the solar collector in summer providing shade to the vegetables. For aesthetic reasons, the structure’s envelope has been designed as a very light diaphragm: it barely touches the barrels with a two-inch flat bar. The glass appears to disappear into the ground when it touches the gravel.

The construction phase of the solar greenhouse began with this spring semester of students. The greenhouse continued to be designed and developed by future groups of students for several years. 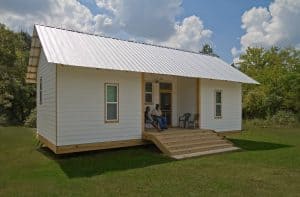 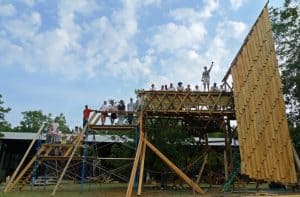